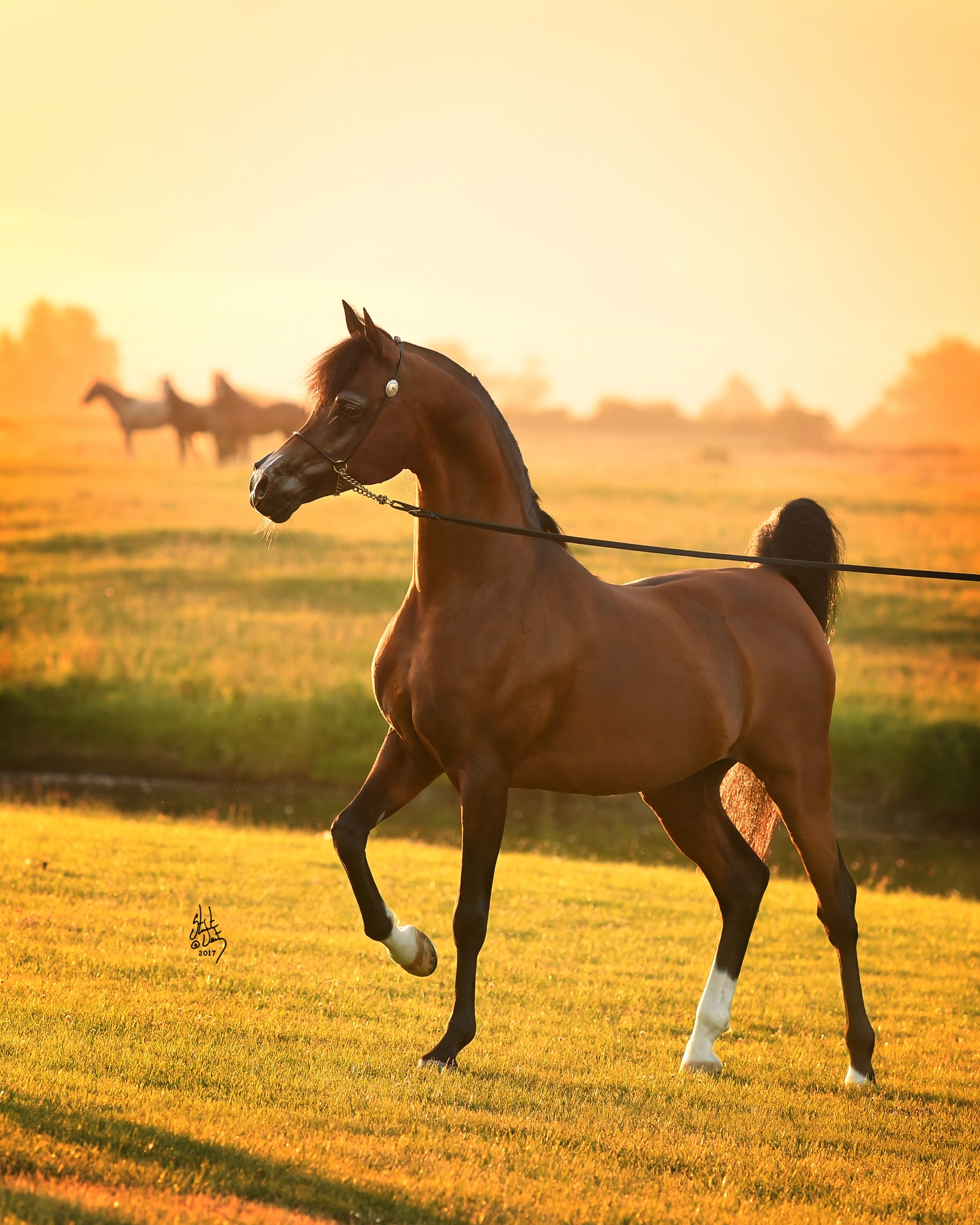 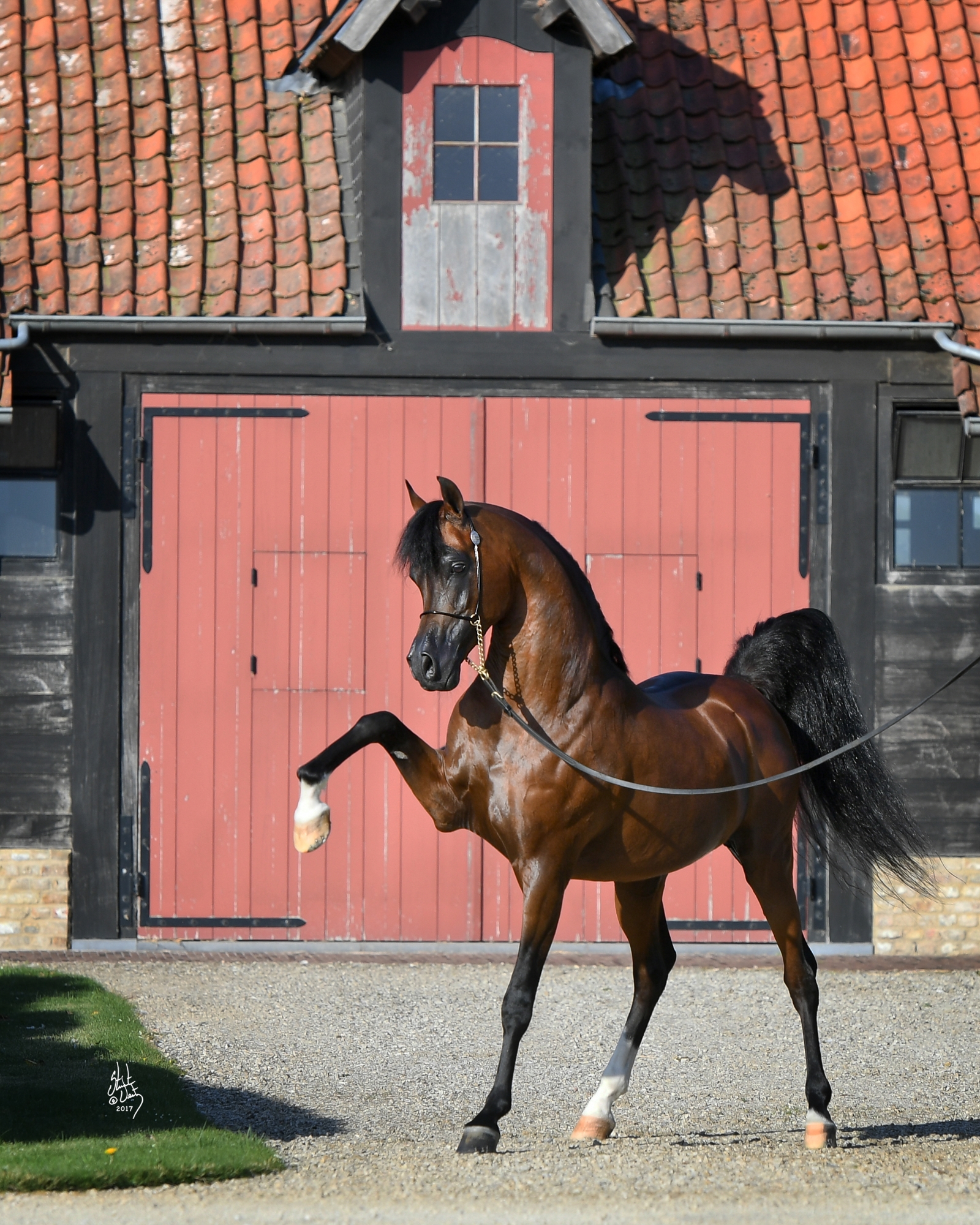 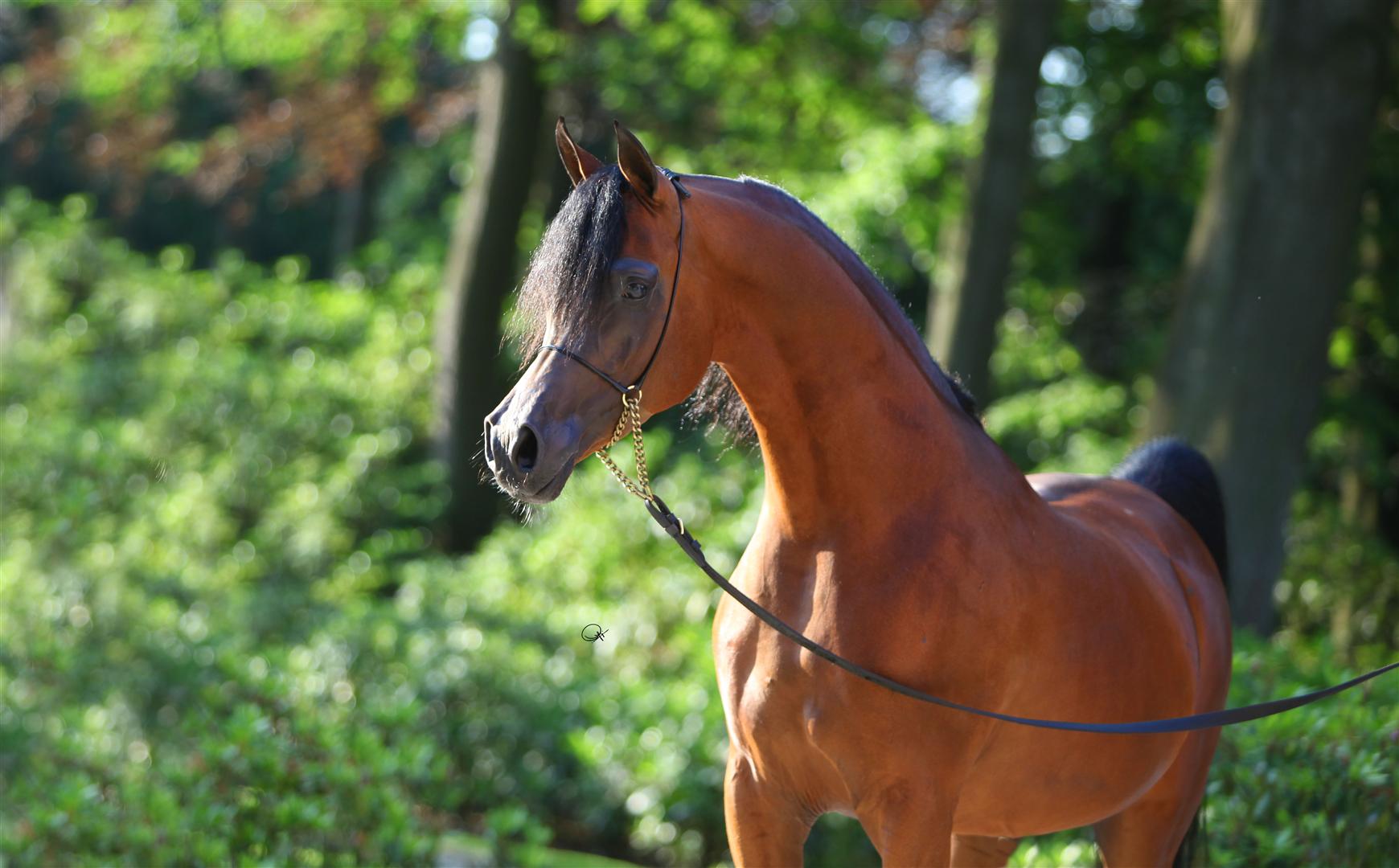 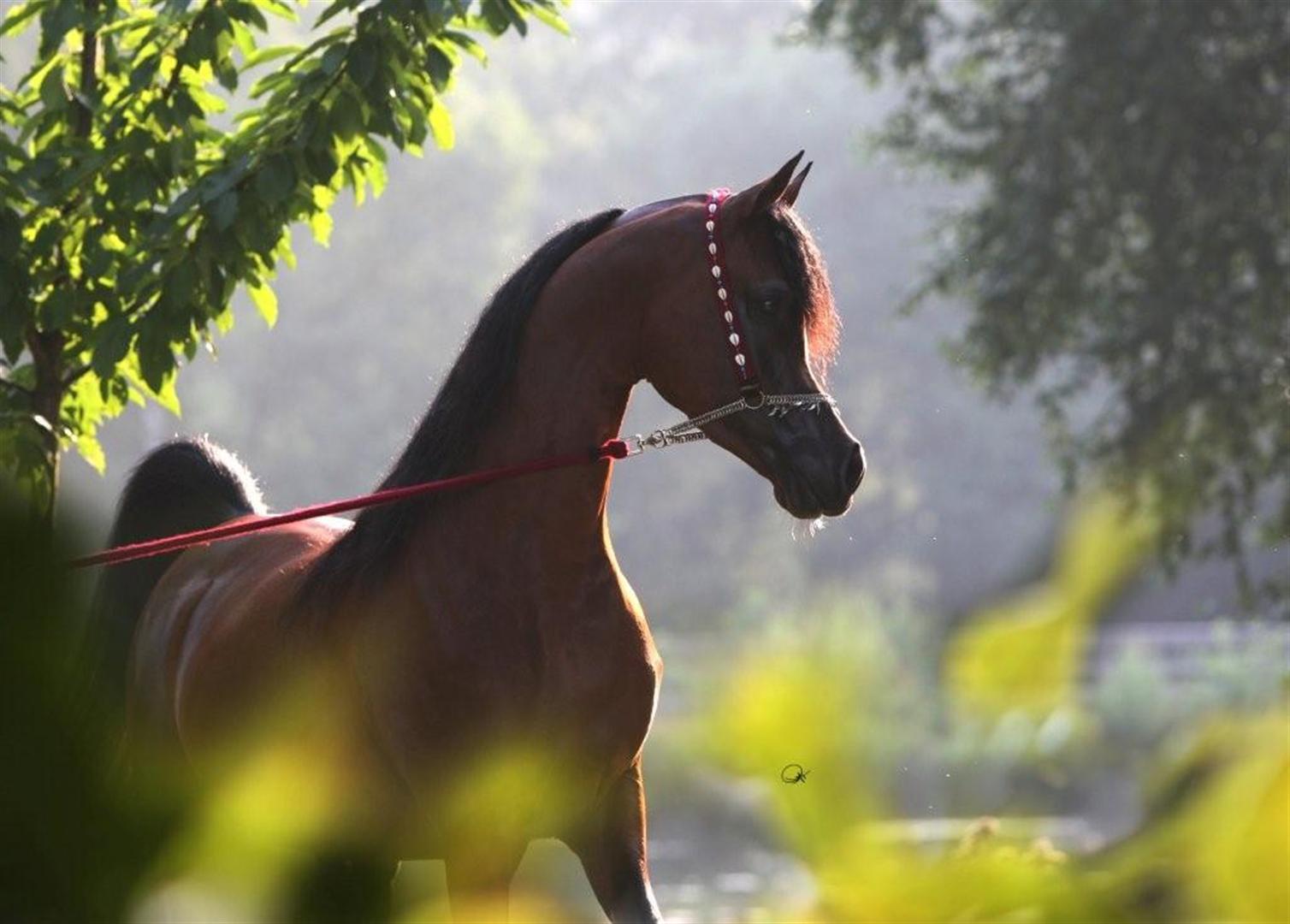 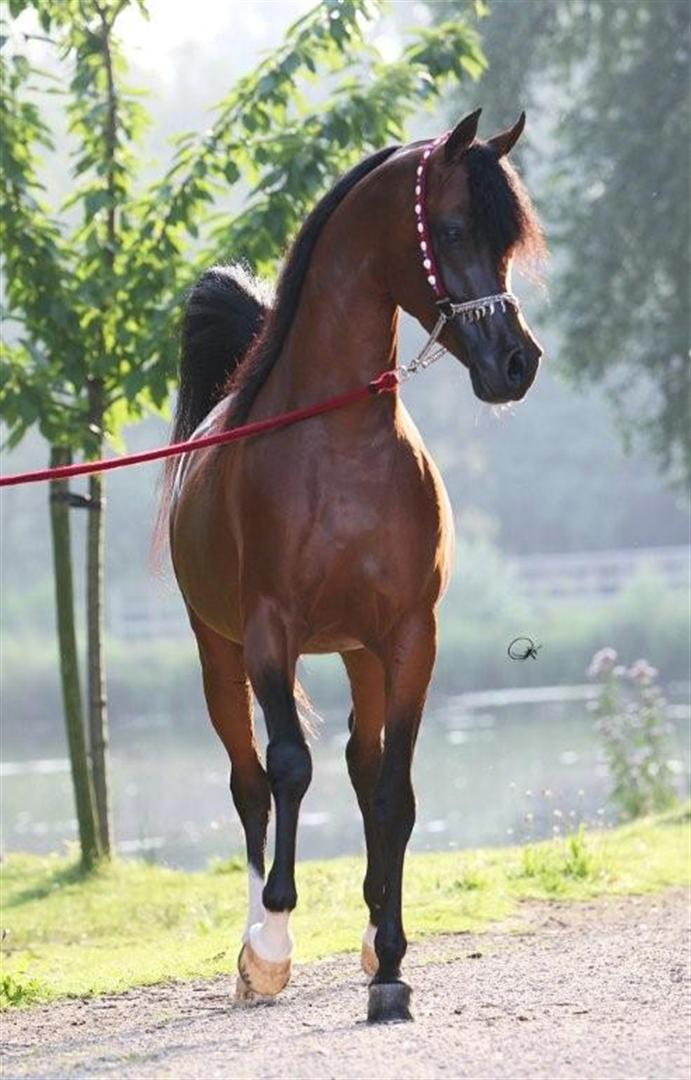 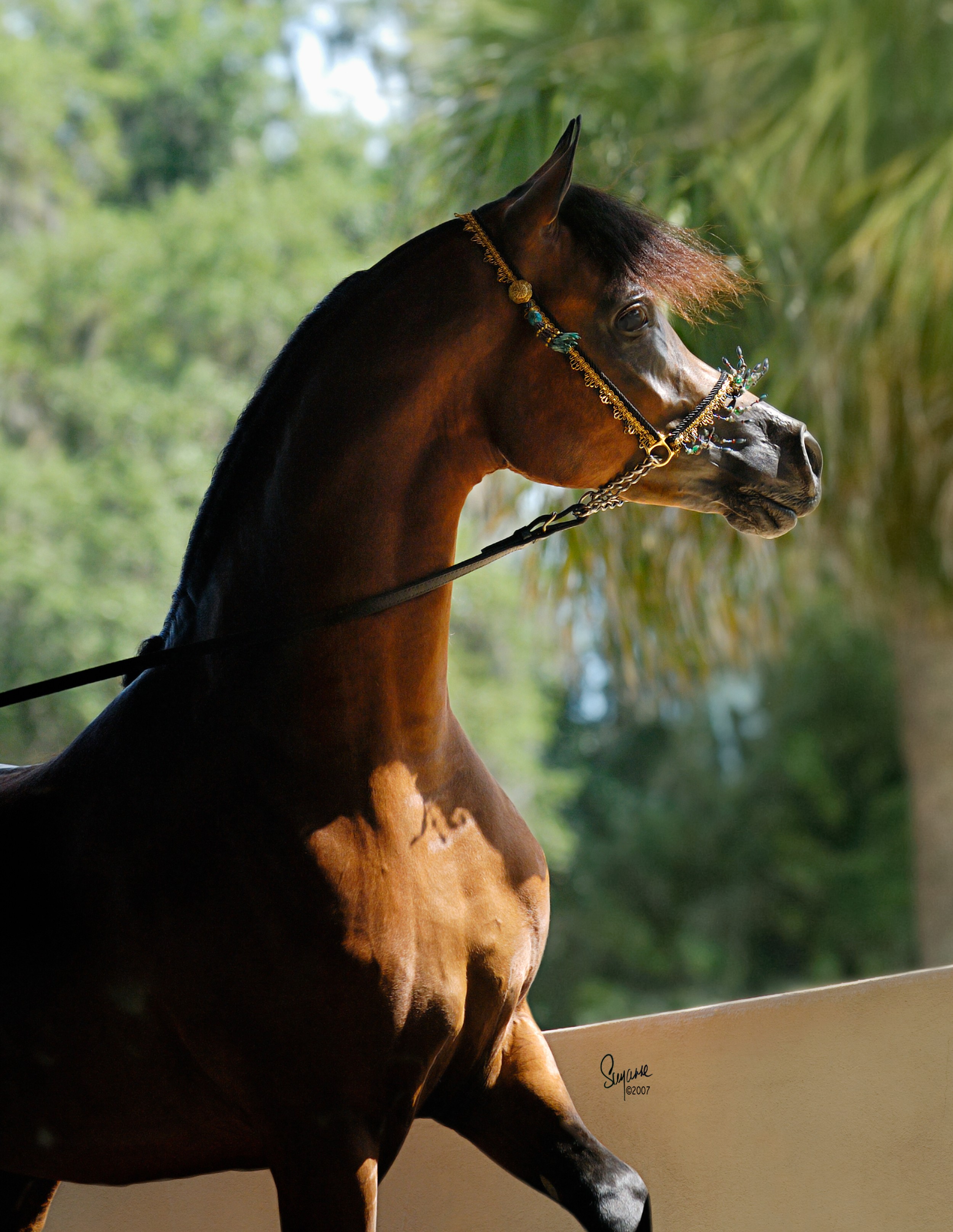 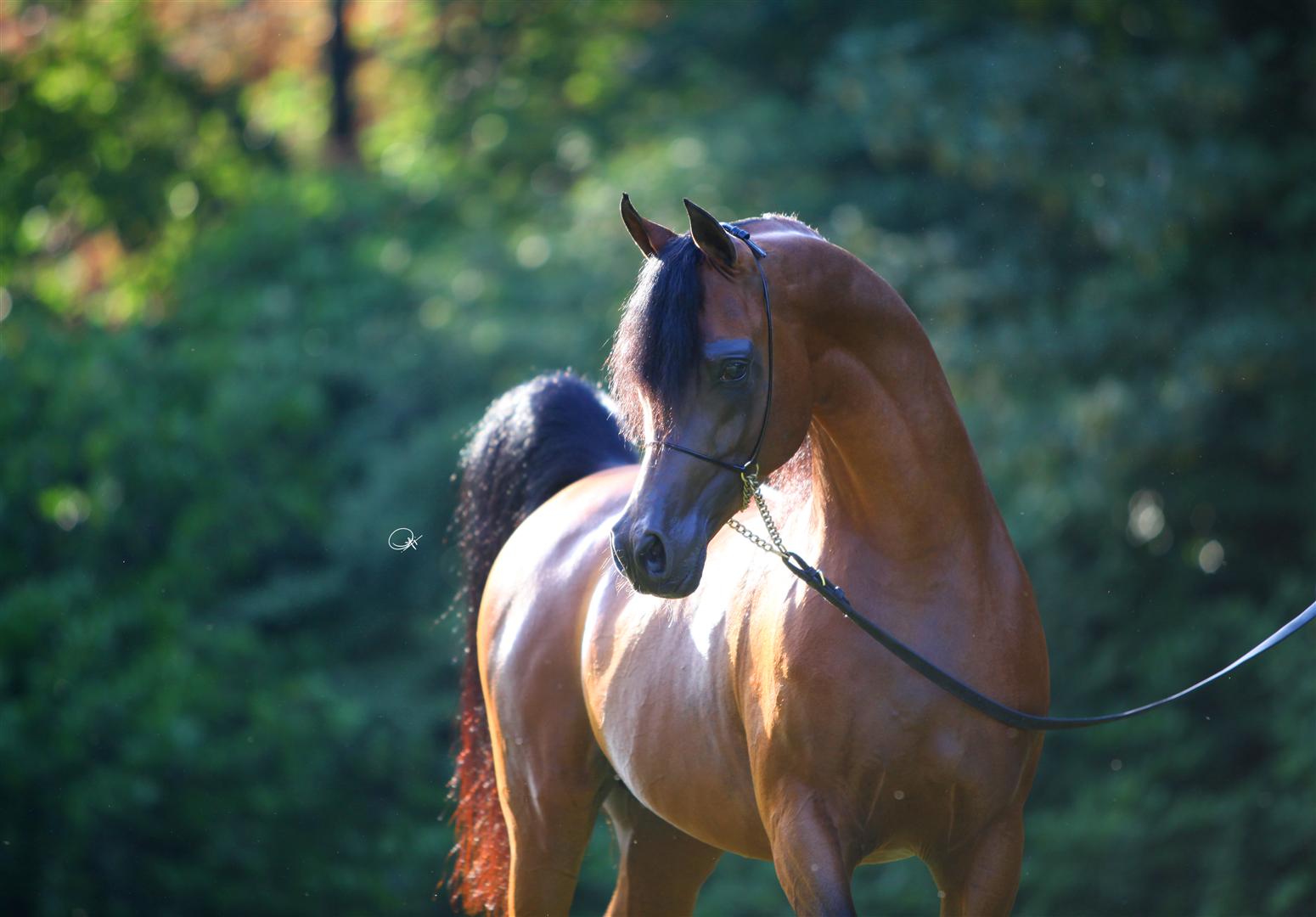 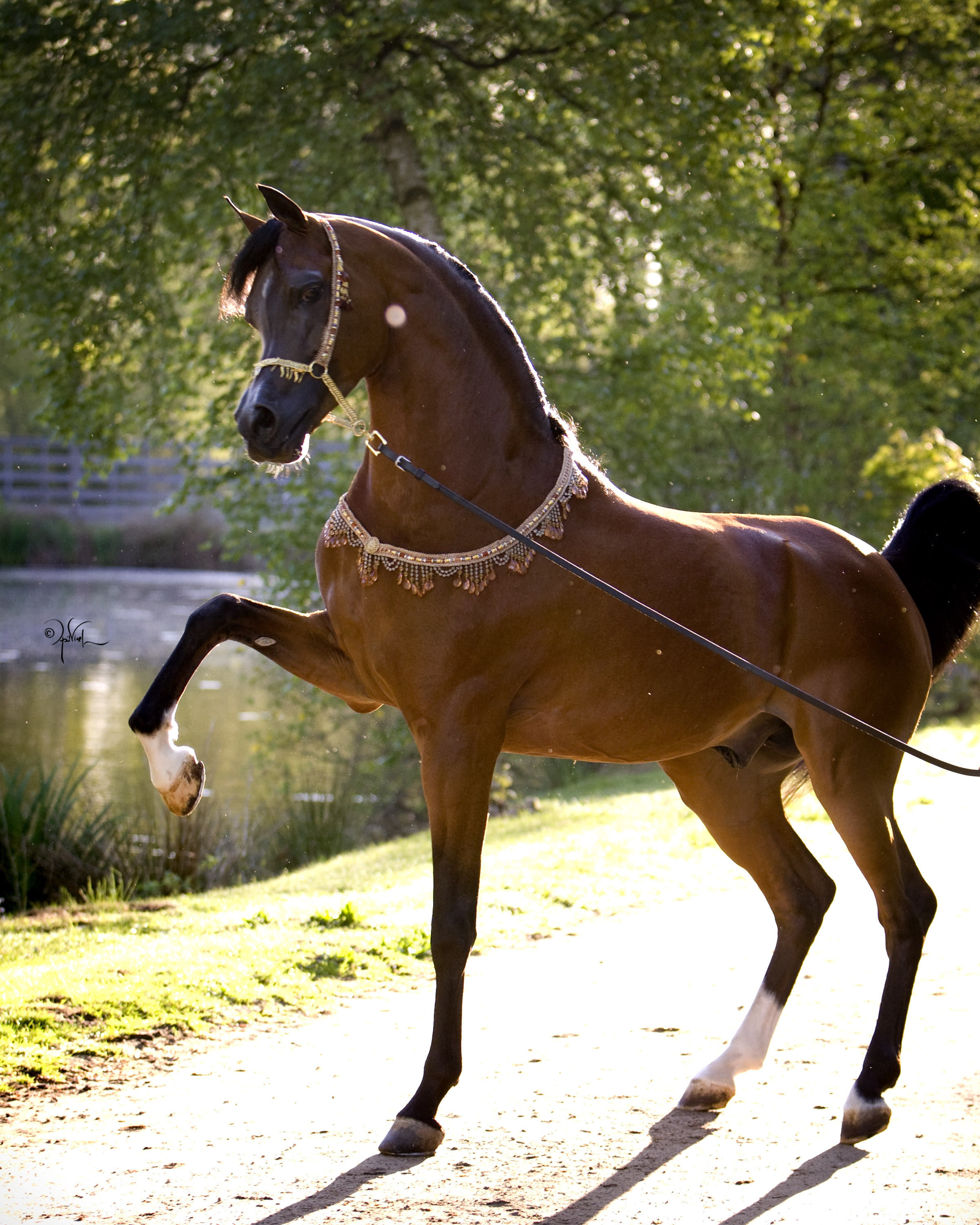 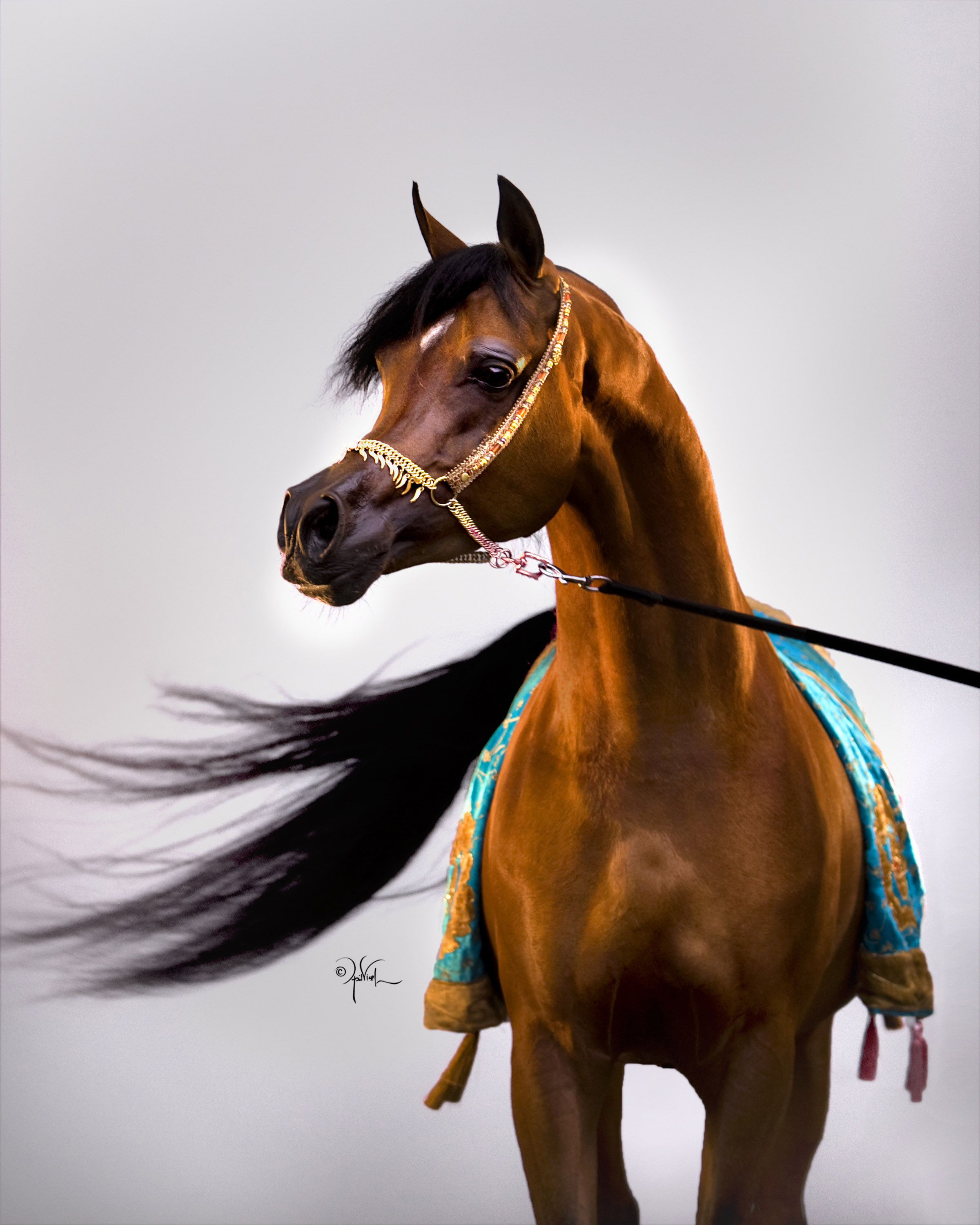 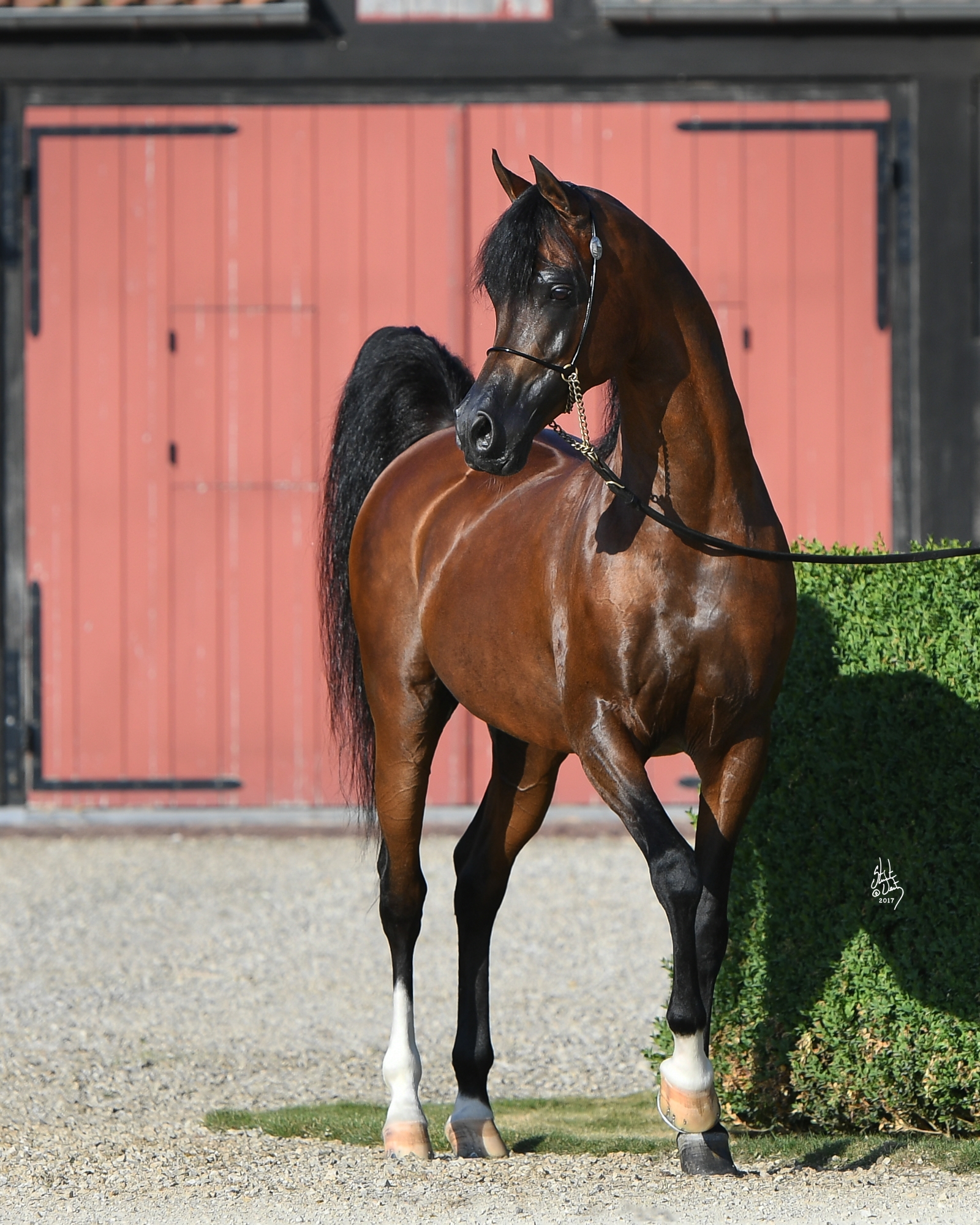 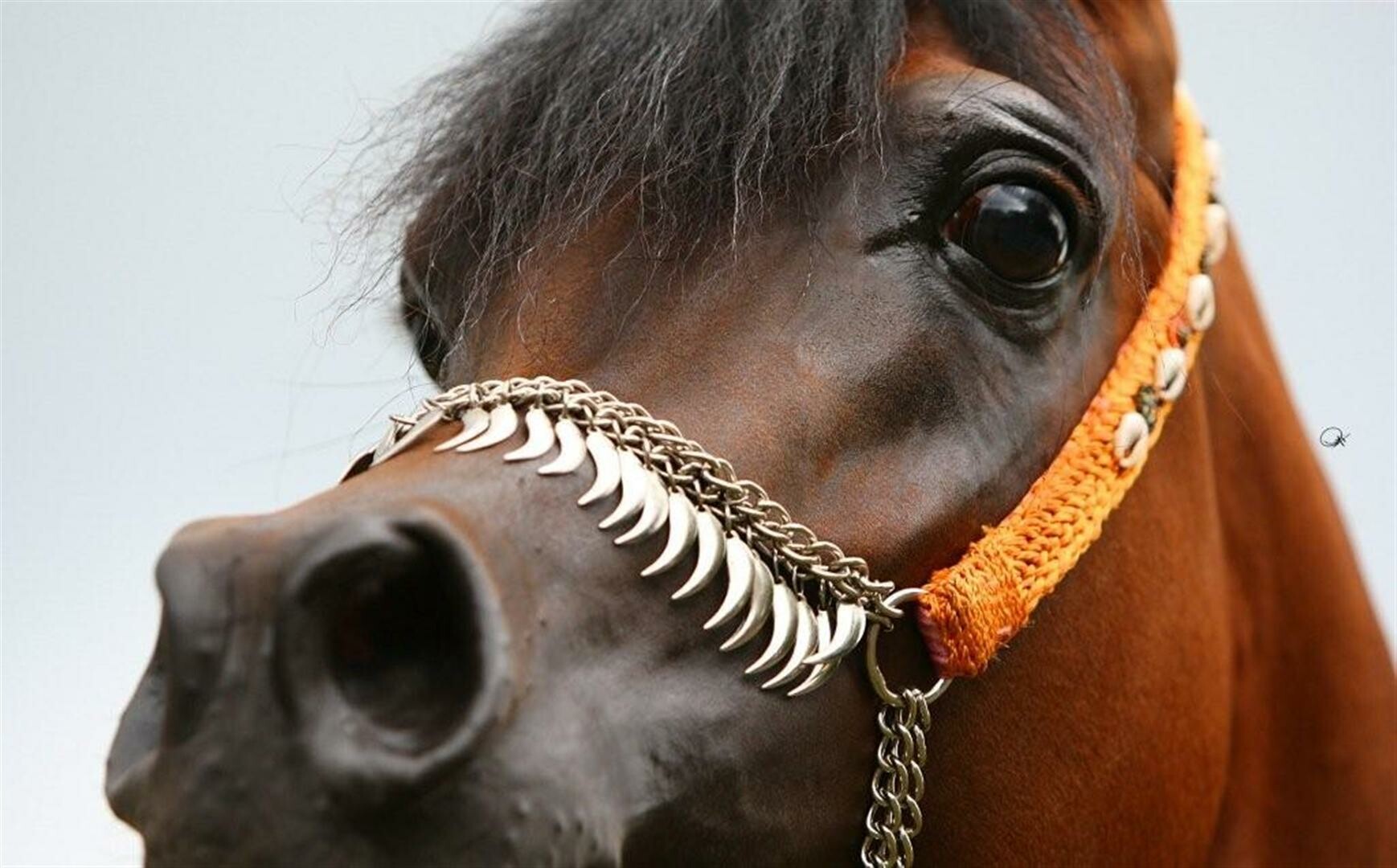 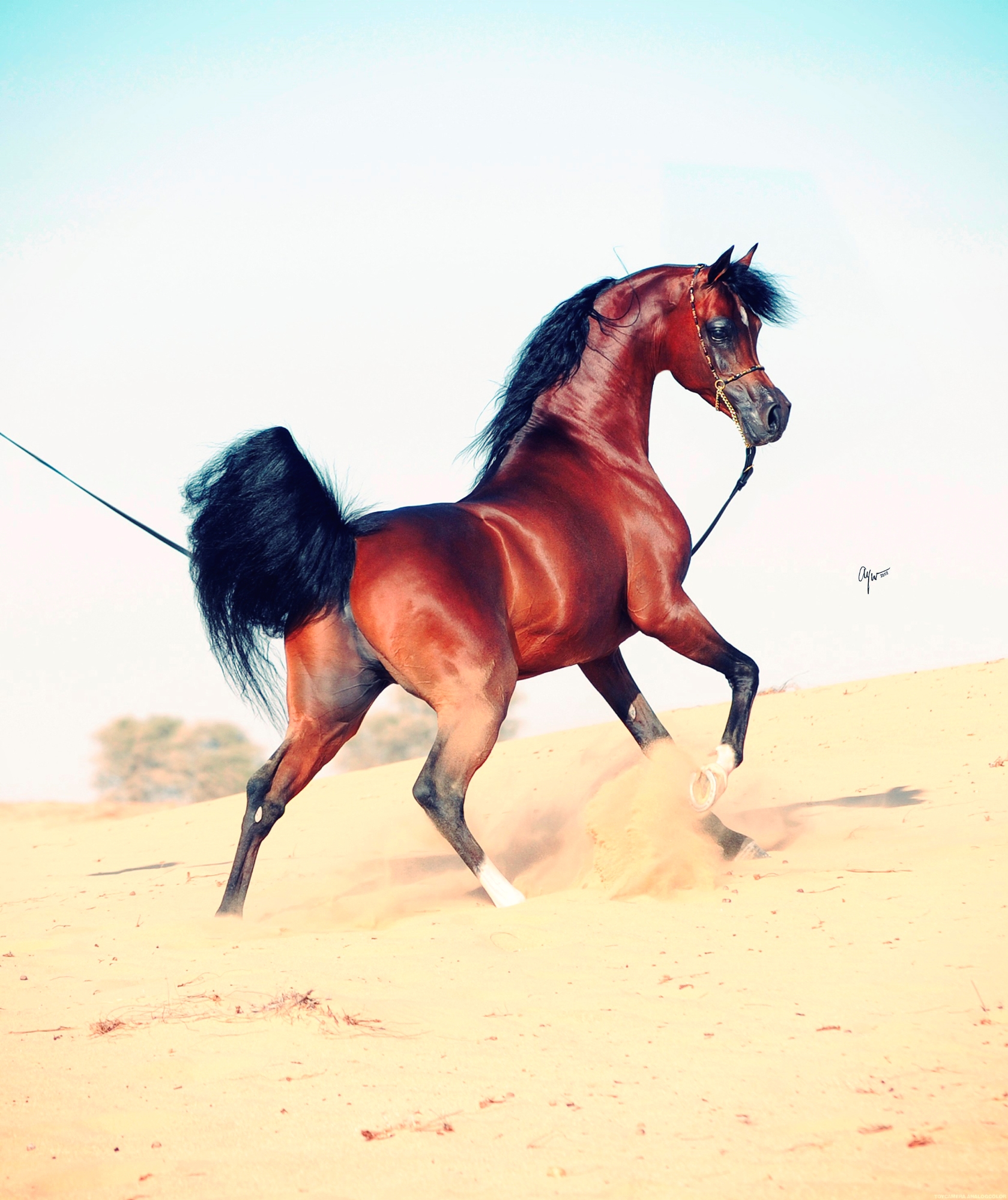 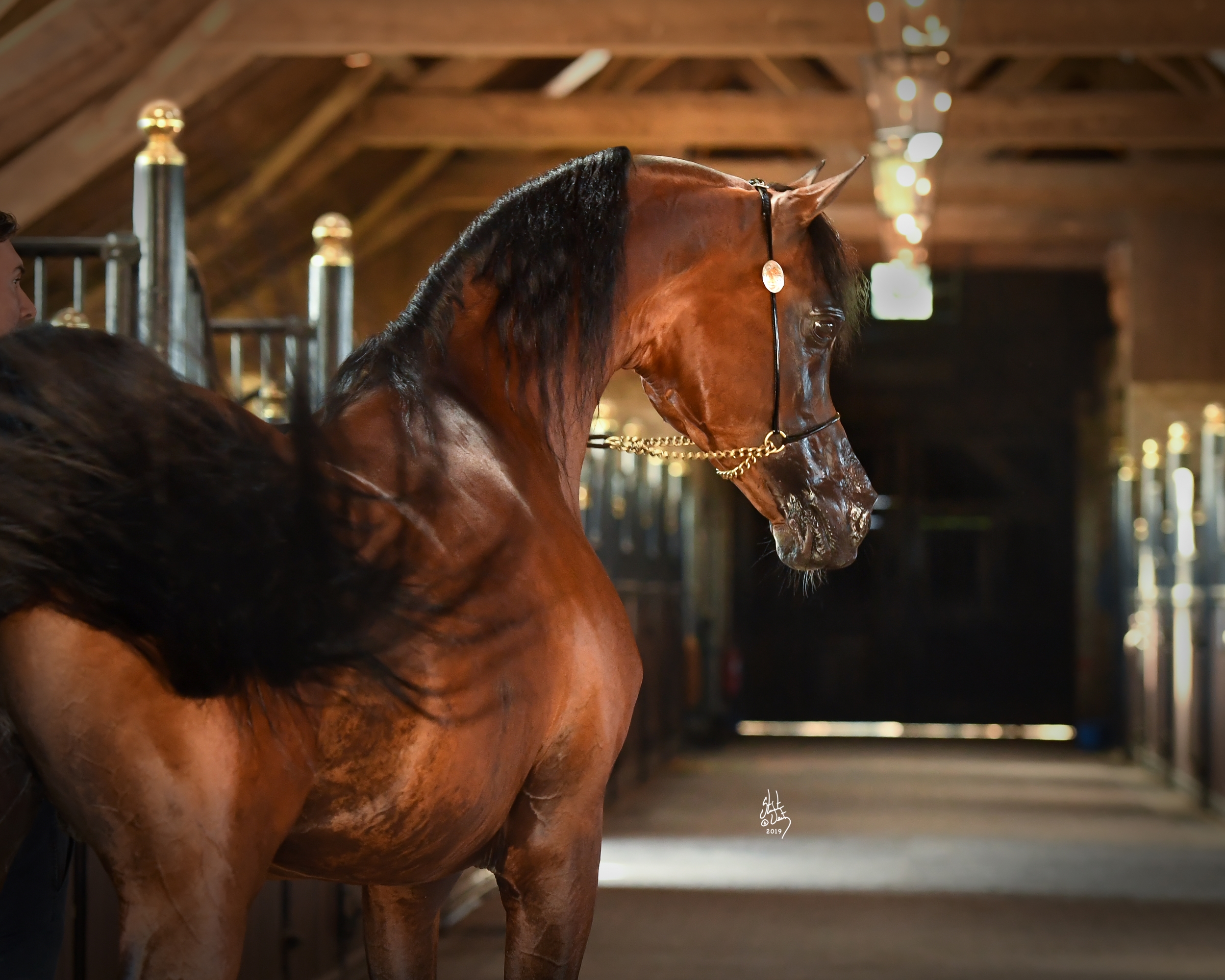 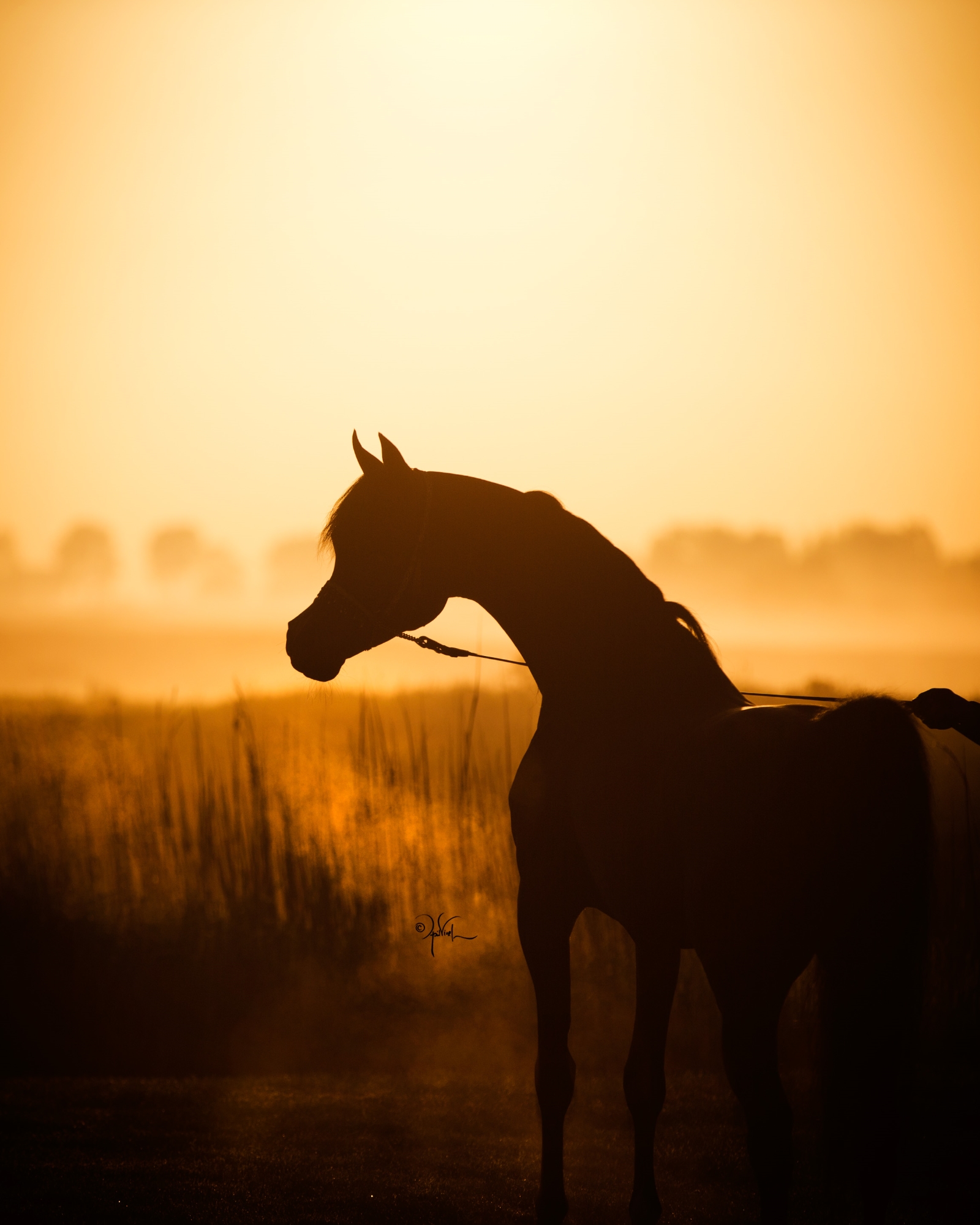 QR Marc’s name is one that continues to be highly regarded around the world. A multiple champion and a leading sire of champions, this 14-year-old charismatic bay stallion is one that has transfixed Arabian breeders around the globe since he was a young colt. Bred in the US by Lou and Vicki Doyle of Quail Ridge Arabians, QR Marc is proudly owned by Paul and Ria Gheysens of Knocke Arabians in Belgium. With his greatest son, Equiborn KA, now representing his sire in the United States, 2019 is set to be QR Marc’s greatest year yet.

I think that it is fair to say that QR Marc was always going to captivate people. His pedigree ensured that. As you look back through his family, some of the world’s best-known and admired names can be found at every step. While Marc is sired by Marwan Al Shaqab (Gazal Al Shaqab x Little Liza Fame by Fame VF), one of the most important stallions in modern breeding, it is well worth looking back further – for one horse does not make a line great; rather, it is a combination of many layers.

QR Marc’s sire line is one of the most revered in history, going back to the 1934 straight Egyptian stallion Nazeer (Mansour x Bint Samiha by Kazmeen), a horse whose influence continues to be felt the world over, and not just limited to Egyptian circles, either. Nazeer’s son, Morafic (ex Mabrouka by Sid Abouhom out of Moniet El Nefous) is influential in QR Marc’s sire line, being the sire of both Shaikh Al Badi (ex Bint Maisa El Saghira by Nazeer out of Maisa) and also Khofo (ex Nabilahh by Anter out of Farasha), the sire in turn of the exceptional mare Bint Magidaa (ex Magidaa by Alaa El Din out of Maysa). Bint Magidaa was covered by Shaikh Al Badi in 1975 and the following year, Ruminaja Ali arrived in the world. This is a line that is repeated though his dam, with Ruminaja Ali as the great-great-grandsire on both sides of QR Marc’s pedigree. This line is a significant one not only in QR Marc’s sireline but indeed the world, as Ruminaja Ali covered the Ansata Ibn Halima (Nazeer x Halima by Sheikh Al Arab) daughter Bint Deenaa (ex Deenaa by Sameh out of Dahma II) and the result was the fabled 1988 bay straight Egyptian stallion Anaza El Farid. When crossed with the Polish mare Kajora (Kaborr x Edjora by Exelsjor), the resulting colt was the World Champion Stallion Gazal Al Shaqab, a living legend whose sons and grandsons have gone on to capture the hearts and imagination of the world, while his daughters have charmed and captivated. A further influx of Polish lines through the late mare Little Liza Fame (ex Katahza by Aza Destiny out of Afhar Rahza) followed. Her sire was the US National Champion Fame VF, himself a son of Bey Shah (Bay El Bey x Star of Ofir by Bask Llana) and out of the Crabbet/Gainey mare Raffoleta-Rose (Raffon x Leta Rose by Gamaar). When Little Liza Fame was crossed with Gazal Al Shaqab, the result was the three-time World Champion Marwan Al Shaqab, a horse who continues to captivate at 19 years of age.

To look to QR Marc’s damline, we again see the influence of Ruminaja Ali, this time through his famed son Ali Jamaal (ex Heritage Memory by El Magato out of Heritage Labelle). There is also a further infusion of Polish and Gainey blood through the mare, The Dreamspinner. She is by the Bask grandson Aristo Kossak (Ariston x Four Winds Kalifa by Cytrys) and out of the Naborr granddaughter Myrilinan Acledo (Gai-Adventure x Jem Mar Amyri by Comar Azamyr). Ali Jamaal and The Dreamspinner were bred together in 1991 and the result was the deep bay stallion Magic Dream CAHR, a multiple champion in Canada and the US, who lived happily in South Africa until his passing. The final line is though QR Marc’s dam, Swete Dreams, a chestnut mare sired by Magic Dream and out of Kouream de Ment (Kouros x Rawhides Amenda by Bagdad of Rawhide out of Rawhides Nakota), who brings in a flavour of the Spanish Arabian bloodlines.

QR Marc became an overnight sensation the moment that he was foaled in California, and it was a race against time to see who reached, and purchased, this superlative colt first. It would be Roxann Hart of Rohara Arabians in Orange Lake, Florida, who would first purchase QR Marc and breed from him, propelling him on to the global stage in the process. While at Rohara, QR Marc also made his debut in the show-ring, earning the titles of 2006 Unanimous Region 14 Sweepstakes Yearling Colt and 2006 US Nationals Reserve Champion Breeders Sweepstakes Colt.

It was in Marc’s two-year old year that Paul Gheysens first encountered this young colt. Paul instantly saw his potential and purchased him. QR Marc was brought to Europe, and he has been the chief sire at Paul’s own Knocke Arabians ever since.

QR Marc’s first show for Knocke Arabians was the inaugural Al Khalediah Arabian Horse Festival in 2008 in the Kingdom of Saudi Arabia. The world paused as this magnificent colt entered the ring, and QR Marc left with what would be the first of many Gold Championship titles. From that moment, on, his name was synonymous with success.

The next two seasons saw QR Marc’s attentions firmly focused on the breeding barn. As well as breeding to the famed mares of Knocke Arabians and private breeders, the young stallion was also used at the Polish State Studs of Janów Podlaski and Michalów, and he made a terrific impression on the mares there. Just some of the successful progeny born there include World Champion Zigi Zana (ex Zagrobla by Monogramm out of Zguba), multiple champion Piacenza (ex Primawera by Emigrant out of Premiera), Pogrom (ex Petla by Visbaden out of Petra) and Wieza Mocy (ex Wieza Marzen by Ekstern out of Wiazma), both champions in the US and Europe, and also Equator (ex Ekliptyka by Ekstern out of Ekspozycja), a World Champion and now a double champion in the United States.

At Knocke Arabians, the results of QR Marc in the breeding barn were just as impressive, especially from the Polish mares that Paul and Ria love so much. Among the QR Marc sons, there is Espressivo (ex Emocja by Monogramm out of Emigracja), Reserve Junior Male Champion at Al Khalediah Arabian Horse Festival and now sold to Iran, where he is making a positive influence on local breeding prgorammes; Emanos KA (ex Emantka by Eukaliptus out of Emanta), Bronze Junior Male Champion at the Dubai International Arabian Horse Championships; Pavorotto KA (ex Palanga), Gold Junior Male Champion at the Deauville Breeders’ Cup Finals and now owned by Rohara Arabians; and the brilliant grey son, Equiborn KA (ex Espadrilla by Monogramm out of Emancja), a double Silver World Champion as a junior among his many titles.

The daughters were just as beautiful, including those from the incredible black mare FS Magnums Madonna (Magnum Psyche x Tai Bey Brittney by Bey Shah), whose pedigree complements that of QR Marc so well. Her daughters with Marc include European Junior Female Champion Marc’s Star; Magnum’s Tulip, who has been so very successful in the show-ring; and Magnum’s Rose. Other QR Marc daughters at the farm include Magenta KA (ex Migracja by Gazal Al Shaqab out of Mandala); Penelope KA (ex Polonia by Ekstern out of Pasja), since sold to Al Thumama Stud in Qatar and the 2011 European Junior Female Champion; Orfa D’Arab KA (ex OSO Axotica by Monogramm out of Algoda), who has won so many titles; and Nadira KA (ex CN Neville by Delmar out of AF Golena), Gold Champion Filly in Bruges.

Having proved himself as a sire, QR Marc made a highly anticipated return to the show-ring in 2012, an event that happened with the collaboration of Dubai Arabian Horse Stud. QR Marc’s first two shows were in the Middle East – the Abu Dhabi National Championships and the Dubai International Arabian Horse Championships – and, led by Paolo Capecci, he left both shows with the Gold Senior Male title. From there, Europe called and QR Marc went to the All Nations’ Cup in Aachen, claiming another Gold championship title.

There was just one show left for QR Marc that year, the Paris World Championships where he had been reserve three times. 2012, however, was QR Marc’s year and he was untouchable – not only did he take the World Champion Stallion title, but his progeny also had an incredible show: Wieza Mocy took the Gold Junior Female World Championship while Equator was named Silver Junior Male World Champion; QR Marc sired five of the World Top Tens in the junior championships, including Knocke Arabians’ own Emerson KA (ex Elerina by Ekstern out of Emantka), the incredible Orfa D’Arab KA, and Espressivo.

QR Marc may not have been shown since then but his progeny continue to excel in the show-ring and they shine for him. At the 2015 Paris World Championships, QR Marc was named Leading Sire, a huge honour for Paul and Ria, and worthy recognition of all that this young stallion has achieved. Equiborn, especially, assisted his sire to this title as he took his second Silver World Championship title, and it is only a matter of time before Equiborn takes a worthy Paris Gold.

From there, the momentum of the QR Marc progeny began to gather pace and come the European Championships, he once again proved to be a sired to be reckoned with. Equator took the Gold Senior Male Championship title for Al Sheikh Stud, while Emperor KA (ex Exposita KA) was named Bronze Junior Male Champion for Knocke Arabians. Meanwhile, Poseidon KA added another title to his name as he was named Bronze Yearling Male Champion. The huge-moving Profender KA (ex Palanga), owned by Florentina Arabians, took the prize for Best Belgian Participant, while the QR Marc grandson, Admiraal (Emerald J x Haniyyah) was named Gold Yearling Male Champion for his owners, the Ajman Stud; Admiraal had already won the equivalent title earlier in the year at the All Nations’ Cup in Aachen. Another Emerald J (QR Marc x Emandoria) progeny, this time the daughter Eralda (ex Enezja), was named Gold Junior Female Champion for her owners, Al Shiraa Stables. Finally, Odille KA (Ajman Monisicone x Orfa d’Arab), a QR Marc granddaughter, was named Silver Champion Filly Foal.

Perhaps the most exciting development at the end of the year was the Equiborn KA is now standing with David Boggs at Midwest Training Center in the United States. To have a QR Marc son of such outstanding quality available to breeders in the country of his sire’s birth is a huge opportunity. Equiborn KA remains one of the eternal favourites of those early QR Marc progeny, and with him now being available to a wealth of breeders and different bloodlines is a chance not to be missed. In addition, Equiborn KA will be shown in the United States, and breeders there are sure to fall in love with him.

It is clear to see that the story of QR Marc is one that continues to grow and grow. The influence of this charismatic stallion is one that travels the world, and his bloodlines are now found everywhere. Yet I feel that we are not yet at the peak, and that QR Marc has yet more brilliance yet to be shared.